“For in conclusion after much deliberation, I have found out this Arte, from the which onely dependeth the knowledge of all that which a man may performe with a weapon in his hand, and not onely with those weapons which are found out in these our dayes, but also with those that shall be invented in time to come…” -Giacomo Di Grassi, 1570 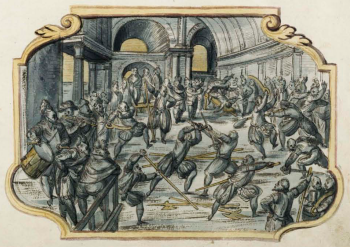 There is a common misconception in modern culture that “martial arts” is an Asian phenomenon, invented by fast and deadly samurai and Shaolin monks, while ancient Europeans fought each other with cumbersome weapons and artless brutality. Nothing could be further from the truth. In the past two decades we have come to learn that Renaissance Europeans left behind the most well documented martial arts tradition in the history of the planet; a tradition based on careful analysis, timeless principles, moral underpinnings, and deadly purpose. The Association for Renaissance Martial Arts has been a key driver of this revival of European martial traditions since its beginning, and we invite you to join us on our journey of discovery.

“Martial arts,” in fact, is a European term in use since at least the early 1500s meaning “the arts of Mars,” the Roman god of war. In a time known as the Rebirth of Classical civilization, it was the perfect term to describe the highly systematized methods of fighting that had been developing in Europe for hundreds of years. As early as 1295, fighting men began producing written and illustrated manuals to instruct students in the arts of combat. By the 15th and 16th centuries, professional schools were becoming common with advanced curricula covering a wide variety of weapons and unarmed fighting, along with moral instruction to discourage students from becoming thugs and criminals. 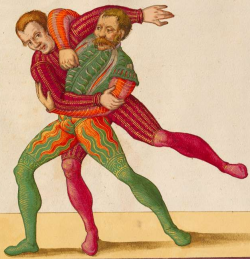 Although teaching methods often varied from master to master and country to country, the common thread that united them was core principles. Timing, distance, leverage, agility, strength, perception and speed were emphasized from Italy to England, Germany to Spain. Concepts learned first with one weapon, most often the longsword, could then be applied to many others and even unarmed combat. Whether learning longsword or rapier, dagger or quarterstaff, instruction was based on intuitive footwork, efficient movement, and sound physics. Underneath it all is the constant reminder that these skills were not for sport or amusement, but for self defense in a violent and dangerous world.

But are these skills relevant today? Without a doubt, yes. As Master Di Grassi observed in 1570, the principles they taught did not apply only to the sword or the spear, but to any weapon a man could hold in his hands (and they were quite creative in devising new weapons back then). Muscles still move and joints still bend just as they did in the 13th century, a sword has much in common with a club, and a knife attack today looks little different from one half a millenium ago. A teacher living in such an unpredictable world as Renaissance Europe could little afford to be limited in his thinking on self defense, and we are lucky today to be able to reap the benefits of their foresight. 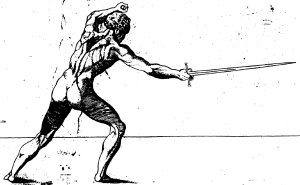 In ARMA, our purpose is first and foremost to reconstruct these arts as close to their original intent as possible. By using rigorous scholarship, accurate training tools, proper energy and speed, and a scientific approach to testing interpretations, we have developed a core curriculum that has enabled us to unlock much of the teachings in the historical manuals, and yet because this revival is still young, there remains much to discover. Our common skill base derived from a holistic review of the entire Art allows us to more quickly develop beginners into competent fighters, and enables us to share with and learn from the larger ARMA community across the United States and around the world. As a scholarly organization in the tradition of the men who wrote the manuals, we encourage original research to become more well-rounded students of the Art. We also put a strong emphasis on public education, and ARMA Houston is very active in our local community providing demonstrations to schools, museums, libraries, scout troops and more to dispel common myths and share our knowledge of history and love for what we do.

If you share a love of swords and history, have a sincere desire to learn an effective historical martial art without the sideshow of costumes and play-acting, and you see yourself in the credo we follow, then come visit our class and join us in the adventure of discovery.

The ARMA Credo:
Respect for History and Heritage
Sincerity of Effort
Integrity of Scholarship
Appreciation of Martial Spirit
Cultivation of Self-Discipline

For more information see:
About the Association for Renaissance Martial Arts