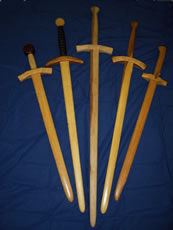 It goes without saying that we have gone through a lot of wasters in our practice of historical fencing, and we have dealt with a lot of suppliers. These suppliers have run the gamut in both waster quality and customer service. Few things are as frustrating as seeing your brand new waster crack after just a few hours of practice, or waiting several weeks for your waster to be delivered from some company that doesn’t bother to even answer your phone calls or email messages.

The suppliers we have listed below have all proven themselves in both providing excellent customer care and solidly-built wasters that will stand up to the grueling punishment of historical fencing.

Duncan Arms – (www.duncanarms.com) Formerly New Stirling Arms (NSA), owner Jim Colgate recently retired and passed the business on to apprentice Rory Duncan, who is offering the exact same products Jim produced.  Duncan Arms offers what they call “the perfect waster” which they say is balanced like a steel sword. We’ve handled them, and they are not far from right! They also guarantee their wasters against defects in materials and workmanship (unless your waster broke because you were abusing it beating it against a concrete wall or some such, send it in and they’ll replace it).

Raven Studios – (www.little-raven.com) Raven Studios offers beautiful wasters with your choice of hardwoods for the grip and guard. Reportedly, their wasters are a little on the long side, so if you are very tall, they might be the supplier for you!

Hollow Earth Swordworks – (www.hollowearthswordworks.com) Steve Archote and his family do a wonderful job of making beautiful wasters that seem to stand up to anything (and for a reasonable price to boot). He also guarantees his wasters against defects in materials and workmanship (basically, unless your waster broke because you were abusing it beating it against a concrete wall or some such, send it in and he’ll replace it).